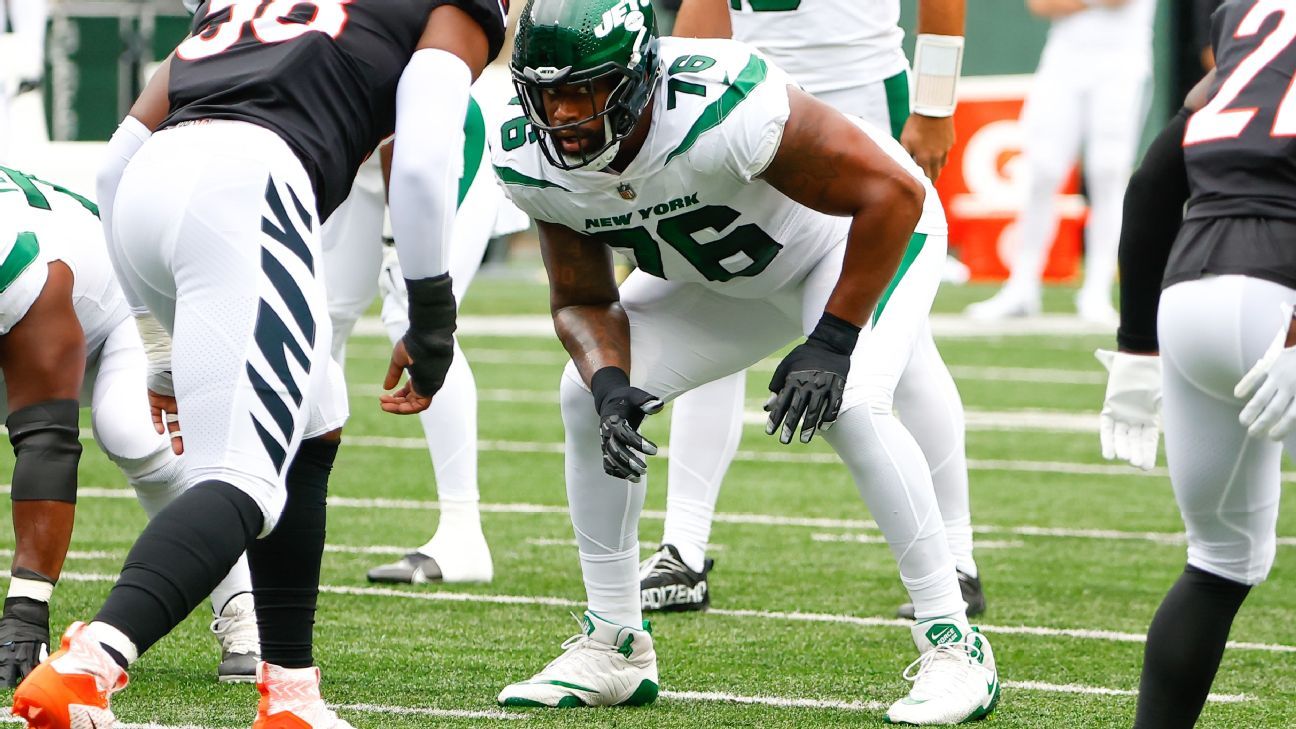 The injury couldn’t come at a worse time for the Jets, who are hoping quarterback Zach Wilson returns to the lineup Sunday against the Pittsburgh Steelers. If Wilson starts, his blindside will be protected by a third-string left tackle, most likely Conor McDermott, a career backup.

Fant’s surgically repaired left knee has been bothering him since training camp — the procedure was performed in the offseason — finally forcing him to the sideline during last Sunday’s loss to the Cincinnati Bengals. He will miss at least four games.

The Jets have endured a run of rotten luck at tackle.

In August, right tackle Mekhi Becton went down in practice with a season-ending knee injury that required surgery. They responded by signing former Pro Bowl left tackle Duane Brown to a two-year, $20 million contract, moving Fant to right tackle. Brown lasted seven practices and one preseason game before a serious shoulder injury forced him to IR.

Brown, 37, is eligible to return next week, although it’s hardly a guarantee he will be ready to play. For now, it looks like McDermott and rookie Max Mitchell (three starts) at left and right tackle, respectively.

On Tuesday, the Jets added reinforcements, signing former Cincinnati Bengals first-round pick Cedric Ogbuehi from the Houston Texans‘ practice squad. He was added to the Jets’ 53-man roster, meaning he might be their top backup on Sunday. Ogbuehi has 30 career starts, but only five over the past four seasons. He has been released by three different teams.

They also signed veteran tackle Mike Remmers to the practice squad. He has 90 career starts, including two last season for the Kansas City Chiefs. He wasn’t with a team in the preseason.

This may not bode well for Wilson, who missed three games as he recovered from arthroscopic knee surgery. Coach Robert Saleh has said he expects Wilson to be cleared by doctors for Sunday’s game, pending a final evaluation.

If Wilson isn’t cleared, the Jets will start Joe Flacco for the fourth straight week. He’s fifth in passing yardage (901), but has led the offense to only five touchdowns and has been sacked nine times. His lack of mobility, coupled with the offensive line issues, isn’t an ideal formula for the Jets (1-2).

“You’re down to your fourth and fifth guys,” Saleh said of the tackle situation. “At this point in the season, you don’t anticipate that. … At the end of the day, no one cares. You have to line up, you have to play football, you have to protect the quarterback.

“[Offensive coordinator Mike] LaFleur has got to find ways to protect the quarterback, no different than we did against Cleveland [in Week 2]. I got confidence in the guys that we’ll figure it out.”

Fant, who signed with the Jets as a free agent in 2020, has been one of the most consistent linemen, having started at both tackle spots over the past three seasons. In the final year of his contract, Fant is eligible to return in Week 8.